USDA's New Inspection System So Dangerous It Could Spur Another Pandemic

“Until now, federal regulations have allowed slaughterhouses to kill as many as one pig every three seconds. Apparently that’s not fast enough for the pork industry.” 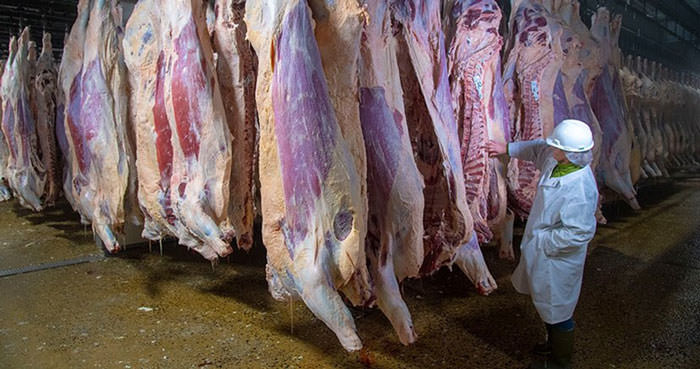 The Humane Farming Association (HFA) has joined with Food and Water Watch and Center for Food Safety in a lawsuit challenging the government's reckless new pork inspection system.

Newly received data shows that the U.S. Department of Agriculture’s (USDA) new rules for swine slaughter plants, or the “New Swine Inspection System (NSIS),” dramatically curtail federal government inspection of animals and carcasses showing signs of diseases and other food-safety or public-health-related conditions, potentially including diseases that can move from animals to people, such as coronaviruses.

Food & Water Watch’s analysis of the data, which was obtained as a result of a federal Freedom of Information Act (FOIA) lawsuit, shows that USDA veterinarians were able to evaluate 3.5 times fewer potentially diseased animals and carcasses in plants that piloted USDA’s NSIS rules, compared to plants that were operating under normal inspection, during the select years in the plants for which data was available.

The data contradicts USDA assurances that long-standing inspection requirements would be unaffected by the new NSIS rules, which allow slaughter plant workers to first determine which animals are fit for slaughter, which carcasses are fit for commerce, and to set their own line speeds. The Federal Meat Inspection Act, first passed in 1906, mandates that government inspectors evaluate each animal arriving at a slaughter plant and every carcass after the animal is slaughtered. If not immediately condemned, federal inspectors tag those showing signs of disease and other abnormal conditions for further evaluation by a government veterinarian before they can proceed. This protects public health. According to Food & Water Watch's analysis of the data, the NSIS system dramatically limits the numbers of swine that can be inspected by trained federal veterinarians, and instead leaves this evaluation in the hands of untrained or under-trained slaughter-plant employees. Meanwhile, the NSIS system allows plant employees to ship animals that are exhibiting signs of dangerous disease elsewhere, thus allowing animals containing spreadable disease to slip through the cracks.

“Self-regulation when it comes to animal movement, slaughter, and meat inspection is bad news. This data shows just how bad it really is. While people across the country are fighting against a dangerous pandemic believed to have come first from animals, USDA is eliminating necessary safeguards against the spread of infectious diseases from swine,” said Zach Corrigan, Senior Staff Attorney, Food & Water Watch. “USDA is endangering public health. They should shut down NSIS immediately.”

USDA rules, finalized in October 2019, are now being implemented in slaughter plants around the country, as companies were supposed to decide whether to participate no later than last week. USDA has so-far rejected requests to stop plant transitions to the dangerous new system in light of the COVID-19 pandemic.

“If this moment teaches us anything, it is that deregulating public health standards can have disastrous consequences. The reason we have federal regulation of meat is because the industry failed to protect public health a century ago,” said Ryan Talbott, Staff Attorney, Center for Food Safety. “USDA’s decision to walk away from its obligation to protect the public is shameful and will almost certainly result in more people getting sick and dying.”

The new data was made public in an amended complaint, filed on Monday, April 6, 2020. The complaint added the Humane Farming Association to the Center For Food Safety and Food & Water Watch’s ongoing suit challenging USDA’s new rules.

“Until now, federal regulations have allowed slaughterhouses to kill as many as one pig every three seconds,” said Bradley Miller, National Director, Humane Farming Association (HFA). “Apparently that’s not fast enough for the pork industry. The Trump Administration has given the nation’s largest hog slaughterhouses a green light to operate at unrestricted speeds, killing and inspecting pigs as fast, and as recklessly, as they want.”

NSIS is the subject of three separate lawsuits filed by worker safety, animal welfare and environmental, and food safety advocates.

Center for Food Safety’s mission is to empower people, support farmers, and protect the earth from the harmful impacts of industrial agriculture. Through groundbreaking legal, scientific, and grassroots action, we protect and promote your right to safe food and the environment. www.centerforfoodsafety.org

Food & Water Watch mobilizes people to build political power to move bold and uncompromised solutions to the most pressing food, water and climate problems of our time. We work to protect people’s health, communities and democracy from the growing destructive power of the most powerful economic interests. foodandwaterwatch.org