We are extremely pleased to report that HFA's Downed Animal Law in California is now in effect - and stands as the most comprehensive downed animal law in the nation.

Earlier this year, the U.S. Supreme Court rendered a decision favoring meat industry groups regarding a narrow portion of HFA's law. The good news: the majority of our new law is untouched. Thus, it is now illegal in California for any farm, stockyard, or auction to buy, sell, receive, or transport non-ambulatory animals, including cattle, pigs, goats, and sheep for commercial sale for human consumption. 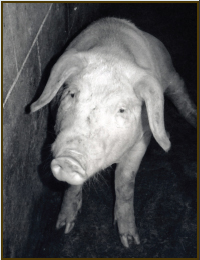 Background: The term "downed animal" describes animals too sick or injured to stand. Rather than putting these suffering animals out of their misery, the industry keeps them alive in order to get them to slaughterhouses. Following a long and painful journey, they are brutally dragged off trucks and butchered.

Several years ago, the meat industry began pushing its own legislation in order to prevent the passage of legitimate laws that prohibit these cruel practices (much in the way the egg industry is now pushing legislation to protect battery cages). The goal of these industry measures was to continue the transport and marketing of downed animals while giving the public a false impression that the animal cruelty issues had been resolved. The most notorious of these measures was SB 692 in California.

With continued activism, however, HFA was ultimately able to advance the legislation it had long advocated, and the transport of downed animals was banned outright - rather than perpetuated by worthless regulations. This ban took the form of HFA's California Downed Animal Protection Act (AB 2098).

Thanks to your support and the skilled authorship of then-Assemblyman Paul Krekorian, HFA succeeded in getting this historic measure signed into law. In addition to addressing the abuse of downed cattle, we also - for the first time ever in the nation - prohibited the transport and marketing of sick and injured pigs, sheep, and goats. HFA's groundbreaking law, quite simply, is the strongest downed animal law in the nation. And we are now directing attention to passing similar laws in other states and on the federal level.

It is your support that makes all this possible.