"This is how veal calves live. Every minute. Every hour. Every day."
- Bradley Miller, HFA on The Oprah Winfrey Show 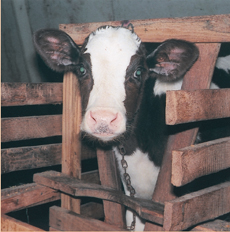 It is with good reason that The New York Times declared our National Veal Boycott the most successful animal rights boycott in the United States. We are pleased to report that, again this year, HFA's signature campaign has driven per capita veal consumption in the U.S. to an all-time low!

When HFA began the National Veal Boycott, veal production was the most rapidly expanding segment of the meat industry. Due to years of unrelenting campaigning by HFA, including television ads, full-page advertisements in major publications such as Time and Newsweek and others, annual veal production has plummeted from a high of 3.4 million calves to the current level of well under 0.5 million.

HFA also generated headlines for what would become legendary undercover investigations and direct attacks on the veal industry's drug-based methods of operation. In so doing, HFA was successful in curtailing the use of the veal industry's most cherished growth hormone, clenbuterol. And the extensive national publicity about this toxic and illegal drug served to inform millions of Americans about the hazards and cruelty involved in the production of veal.

When measuring our success, we do not simply add up the number of veal factories HFA has shut down, the media coverage we have generated, or the number of states that have moved to ban veal crates.

It is the dramatic drop in U.S. veal sales that tells the real story of HFA's unparalleled success in preventing the suffering of millions of animals. But we can't let up now! Your continued support will help HFA make even further progress.

From his first day to his last, the life of a "milk-fed" veal calf is one of deprivation, stress, and disease. Veal factories take newborn male calves from their mothers and chain them in crates measuring only 22" wide and 58" long. This is where they will spend their entire lives.

Chained in tiny crates, veal calves cannot walk, turn around, stretch their legs, or lie down in a natural position. To obtain the light colored meat sold as "milk-fed" veal, calves are deliberately kept anemic.

This is the terrible fate of hundreds of thousands of veal calves every year in the United States.

Would you knowingly serve your family sulfa drugs, clenbuterol, penicillin, tetracycline, or drug resistant strains of bacteria for dinner? Of course not.

Unfortunately, these and countless other substances have been found in veal calves. The harsh conditions in veal factories result in severe calf diseases. By depriving veal calves of their mother's milk, fresh air, exercise, adequate nutrition, and proper veterinary care, veal factories are a breeding ground for stress and infectious diseases.

Veal factories attempt to counter the effects of intensive confinement by administering a wide array of antibiotics and other chemicals. This "cost effective" practice represents a significant hazard to public health. The routine use of antibiotics in veal and other factory farm products is resulting in antibiotic resistant strains of bacteria. These virulent bacteria render formerly life-saving antibiotics useless in combating human disease.

How You Can Help!

Your boycott of veal and support of HFA will help end this cruelty and stop one of the most abhorrent bizarre agricultural practices ever developed - the deliberate raising of anemic animals.

Please join with us.