UEP president, Chad Gregory, acknowledged from the very start that UEP’s primary mission — now accomplished — was to get the co-opted Humane Society of the United States (HSUS) on record as endorsing the so-called “enriched” battery cages that animal advocates across the nation have long opposed.

“Even though the federal bill is all but dead, HSUS will not be reviving any of its anti-cage ballot measures as they previously claimed. Nor will HSUS seek to have enforced any ‘cage-free’ measure already passed,” said Bradley Miller, National Director of the Humane Farming Association (HFA).

“HSUS's endorsement of egg factory cages was never really conditioned on the passage of federal legislation, as people were led to believe. The egg bill was a smokescreen to cover HSUS’s startling flip-flop and abandonment of anti-cage laws,” said Miller.

“UEP now has HSUS on record as accepting modified battery cages as an industry standard — even here in "cage-free" California,” noted Miller.

HSUS president, Wayne Pacelle, said that his group will continue lobbying for the egg bill. Miller contends that is merely posturing. “Pacelle is simply trying to delay public recognition of his failure for as long as possible,” said Miller.

In the wake of its failure in Congress, HSUS is now reverting back to double-talk about how going cage-free is "consistent" with Proposition 2. Simultaneously, HSUS contends that modified battery cages are also acceptable. In short, HSUS continues to play both sides of the issue.

Ultimately, what matters here is voter intent. Notwithstanding the errors HSUS made in drafting the measure, the voters of California clearly intended to outlaw cages for laying hens by passing Proposition 2.

“The courts have long recognized that voter intent matters when it comes to ballot measures,” noted Miller. “Regardless of any post-election attempts by HSUS and the egg industry to reinterpret Prop 2, it would be crazy for egg companies in California to invest in any form of battery cages.” 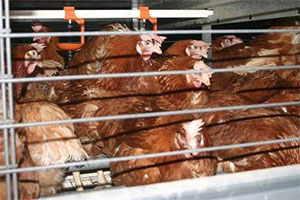 An "enriched" battery cage, according to HSUS and the egg industry.