BY BRADLEY MILLER - SPECIAL TO THE BEE 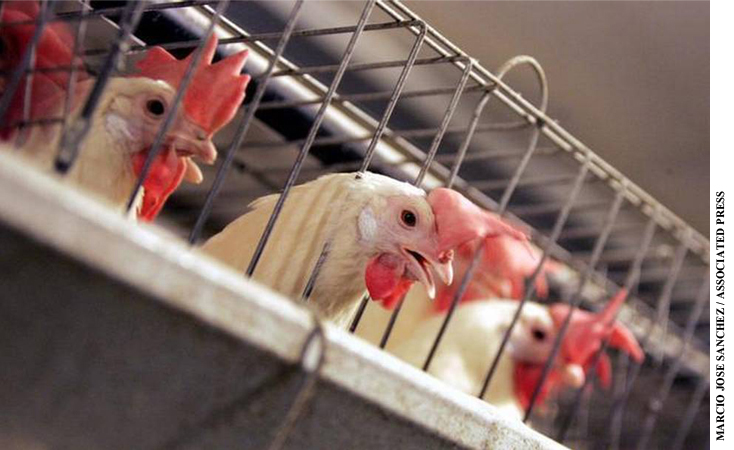 At this moment, millions of egg-laying hens are locked in factory cages throughout California. But wait: With scientific data pointing out health concerns for consumers, and public outrage over cruel conditions for hens, didn’t voters overwhelmingly enact a ballot measure six years ago that outlawed those cages?

No. They just thought they did.

The measure was called Proposition 2. Its sponsors promised voters that it would ban all egg industry cages statewide by Jan. 1. Not merely increase their size, but ban them.

The inescapable and heartbreaking reality is that had Proposition 2 actually contained what backers claimed, California would be cage-free at this very moment.

Instead, the state’s egg industry is investing in new cages, as well as modifying old ones. This obscene reversal of voter intent was made possible by the determined negligence of Proposition 2’s sponsor, the Humane Society of the United States.

The Humane Society was repeatedly warned by the Humane Farming Association and many other animal advocates that the continued use of cages would be the legacy of Proposition 2 unless its fatally flawed language was corrected.

At the time, there was still ample opportunity to make clear in the initiative itself that cages would be prohibited. At the very least, Proposition 2 needed to specify exactly how much space would be required per hen. Sadly, all those warnings were ignored as backers marched ahead with a hopelessly vague and utterly unenforceable measure.

Now, six years later, the chickens have come home to roost. And, unsurprisingly, they’re being put in cages.

State regulations provide only 116 square inches per hen – roughly the size of a sheet of legal paper. This is exactly the kind of intensive confinement voters were told Proposition 2 would outlaw. This cage space allotment does not come from Proposition 2, but rather from separate regulations written by the California Department of Food and Agriculture. The department has been explicit in stating that it is not enforcing Proposition 2. The same goes for local law enforcement, which is laughing off the measure entirely.

Worse still, in the years since Proposition 2’s passage, the Humane Society has flip-flopped on the issue of cages. It even joined with the egg industry’s leading trade association, United Egg Producers, in pushing for federal legislation that would preempt state laws and, you guessed it, establish modified cages as a national standard.

No help for calves, either

To distract from this stunning failure to deliver on its promises, the Humane Society now claims that the $10 million spent on the campaign was still worth it because Proposition 2 got rid of “veal crates.”

Nothing could be further from the truth. Not one single veal calf is, or ever was, affected by Proposition 2. In fact, there haven’t been any veal crates in California since the 1990s. Inserting a reference to veal calves in the measure was done simply to gain votes and to achieve a symbolic, albeit empty, victory.

There are, however, still many other calves kept in crates so small that they cannot turn around, as defined in Prop 2. They are dairy calves known as replacement heifers. Why is that still allowed? Because, despite the objections of many animal advocates at the time, those calves were excluded from the ballot measure.

In other words, Proposition 2 sought to ban veal crates that didn’t exist and had not existed for years, while explicitly allowing the use of crates that did exist, and which still do.

After years of waiting for its implementation, Proposition 2 is finally being recognized, and discarded, for what it is – an empty vessel of false promises, wasted resources and squandered opportunity.

“We didn’t spend $10 million so that birds could still be confined in cages.”

“No cages conform to the requirements of Proposition 2.”

“[All egg industry cages] will be obviously illegal in 2015.”

— Actual HSUS statements to the media,
prior to switching sides and endorsing
cages as a national standard.

One might assume that this photo of Wayne Pacelle of the Humane Society of the United States (HSUS) is from one of his “victory” celebrations in 2008 — back when he was building his career on illusory claims that Prop 2 would make egg factory cages illegal in California by January 1, 2015.

But, incredibly, this champagne toast to Prop 2 occurred — just as voters, who had waited six long years, were finally realizing that California’s laying hens were still suffering in cages.

“ ‘It feels damned good,’ said Fearing, who has parlayed the Prop 2 victory into her own lobbying firm.”

Jennifer Fearing and Wayne Pacelle are the HSUS executives most responsible for deceiving donors and voters about Proposition 2. For purposes of career advancement, book sales, and personal gain, they have been falsely claiming credit for “banning” egg factory cages in California for more than six years.

In reality, their malpractice is directly responsible for the fact that millions of California hens remain suffering in cages. With the state’s egg industry triumphantly reinvesting in cages, you might wonder what these two have to say for themselves now. Well, here it is: “Proposition 2 is working just as planned.”

Elaborating further, Pacelle and Fearing contend that even though California’s egg-laying hens remain in cages — with absolutely no Prop 2 legal enforcement whatsoever — no one should be alarmed. Not because, as long promised, HSUS is ensuring that violators are prosecuted. Far from it. Instead, HSUS says that it is asking stores to voluntarily “honor” its measure. For additional diversion, they irrelevantly point to some businesses that have non-bindingly indicated that they will buy only cage-free eggs at some point in the future. Years in the future.

It’s the classic HSUS two-step. After exploiting the good faith and hard work of countless volunteer signature gatherers, wasting more than $10 million in donations, and having voters wait six years for its non-existent implementation — HSUS now acts as if Prop 2 were merely a suggestion — rather than the enforceable anti-cruelty law that was promised.