After a major battle in Congress, we are pleased to report that the egg industry has failed to insert its Rotten Egg Bill (S 820) into the 2014 Farm Bill.

This victory follows HFA's intensive lobbying against the bill, which included a massive letter-writing campaign, online-petition drive — and our placing full-page ads in USA Today, The Washington Post, and other prominent publications.

Unfortunately, the industry did not walk away empty handed. From the very start, the egg industry acknowledged that a primary goal was to get the co-opted Humane Society of the United States (HSUS) on record as endorsing egg factory cages.

This calculated move by the egg industry ensured that HSUS can never revive the Washington and Oregon ballot measures that it killed at the behest of egg companies. Nor can it credibly seek to have enforced any "cage-free" law already passed.

That job now falls to the rest of us!

Proposition 2
Cage-Free or Free to Cage?

It's been more than six years since California voters overwhelmingly passed Proposition 2. It officially went into non-effect on January 1, 2015.

Indeed, throughout the entire Proposition 2 campaign — and in the years which immediately followed its passage — both HSUS and the United Egg Producers described the measure as requiring cage-free conditions.

This acknowledgment that voters were promised a ban on cages suddenly disappeared when HSUS' Wayne Pacelle switched sides and announced that his group was joining with the egg industry in support of the federal Rotten Egg Bill.

From that point forward, virtually all media coverage on the issue focused on how HSUS, the wealthiest animal organization in the country, had "set aside its differences" with the egg industry and is now endorsing the use of egg factory cages.

Outrageously, Pacelle has even gone so far as to praise the new egg factory cages that the JS West egg company recently installed — right here — in "cage-free" California.

The damaging effect of this hypocrisy cannot be emphasized enough.

JS West is the exact same company — and those are the exact same cages — that Pacelle himself had previously condemned as being illegal and a gross violation of Proposition 2's "cage-free" requirement.

Thus, even though the industry failed to kill Proposition 2 outright with the Rotten Egg Bill, it is now capitalizing on HSUS's capitulation in order to redefine Proposition 2 into oblivion. 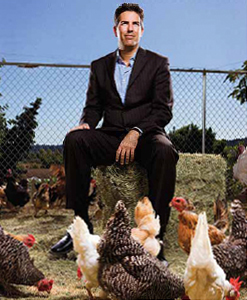 "California will be a
cage-free state."

"Hens are simple creatures and don't need much ...."

The contempt the egg industry displays for the needs of laying hens is now matched by HSUS's disregard for the truth, its own previous position, and the will of voters.

The JS West Egg Company spent nearly $350,000 trying to defeat Proposition 2. After losing at the ballot box, the company is trying to redefine the law and gain public acceptance for its slightly modified battery cages.

Initially, HSUS stood alongside the Humane Farming Association in condeming the new egg factory cages at JS West. This was reflected in Pacelle's initial public statements.

"Now that Prop 2 is law, JS West is trying to punch a hole in it," said Pacelle.

"A slightly bigger cage is going to continue to frustrate the natural behavior of laying hens," continued Pacelle at the time. "No cage system used by the egg industry allows birds to engage in the basic behaviors required by Prop 2."

That acknowledgement of reality completely disappeared once Pacelle switched sides and began advocating for cages. 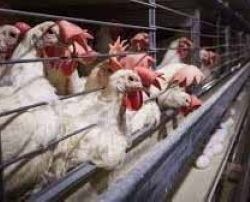 "We got HSUS to endorse these cages.
And that's priceless!
The alternative is that we go cage-free."

"We brought Wayne Pacelle down here...HSUS got behind this because they believe it has addressed all of their concerns."   — JS West Egg Company

If we don't all stand together to fight this now, an entire new generation of cruel battery cages will be installed, not only in California, but throughout the entire nation.

We are counting on your strong support so that farm animals receive the legal protection they so desperately need and deserve.

We are cage fighters, and we truly need your help today.